In a previous post, I discussed the statistics on Why Women Run?  The key finding was that women run to stay fit and healthy just like men.   Unlike their male counterparts, however, women also see running as a way to reduce stress. These findings reflect changing demographics as well as how women experience the physical symptoms of stress.

Typically, women runners are around 40.  Sixty percent are married and 77.8 percent are college educated.  Moreover, they are affluent; 70.8 percent earn a household income over $75,000.  Many of these women have come late to running, usually starting in their 30s, and have run for an average of 9.6 years.  Female runners participate in about 7 races per year with about half completing a marathon at least once in their lifetime.

Indeed, the number of women who finish events has risen from a little over a million in 1990 to over 8.6 million female participants in 2012. 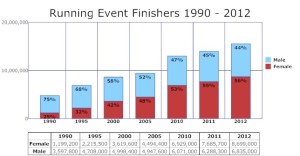 This rise in women’s participation in competitive running events has coincided with rising stress levels among women, especially married women, who struggle to balance both work and family.  For instance, in a recent study, women were more likely than men (28 percent vs. 20 percent) to report having a great deal of stress (8, 9 or 10 on a 10-point scale).  Almost half of all women (49 percent) surveyed said their stress has increased over the past five years, 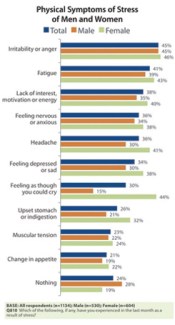 compared to four in 10 (39 percent) men.  Women are more likely to report physical and emotional symptoms of stress than men, such as having had a headache (41 percent vs. 30 percent), having felt as though they could cry (44 percent vs. 15 percent), or having had an upset stomach or indigestion (32 percent vs. 21 percent) in the past month.  Married women report higher levels of stress than single women, with one-third (33 percent) reporting that they have experienced a great deal of stress in the past month.

Clearly, running can be an important tool to manage stress.  It can also help alleviate many of the physical and emotional symptoms of stress.  A recent study published in the Journal of Neuroscience , showed that  gene markers associated with anxiousness increased noticeably in mice that didn’t run, while mice that were forced to run before being exposed to stress, a dunk in cold water, failed to show a significant uptick of those same gene markers.

So even if your not forced to take a cold-water plunge, go for a run.  You will feel and look better.

For busy women on the run